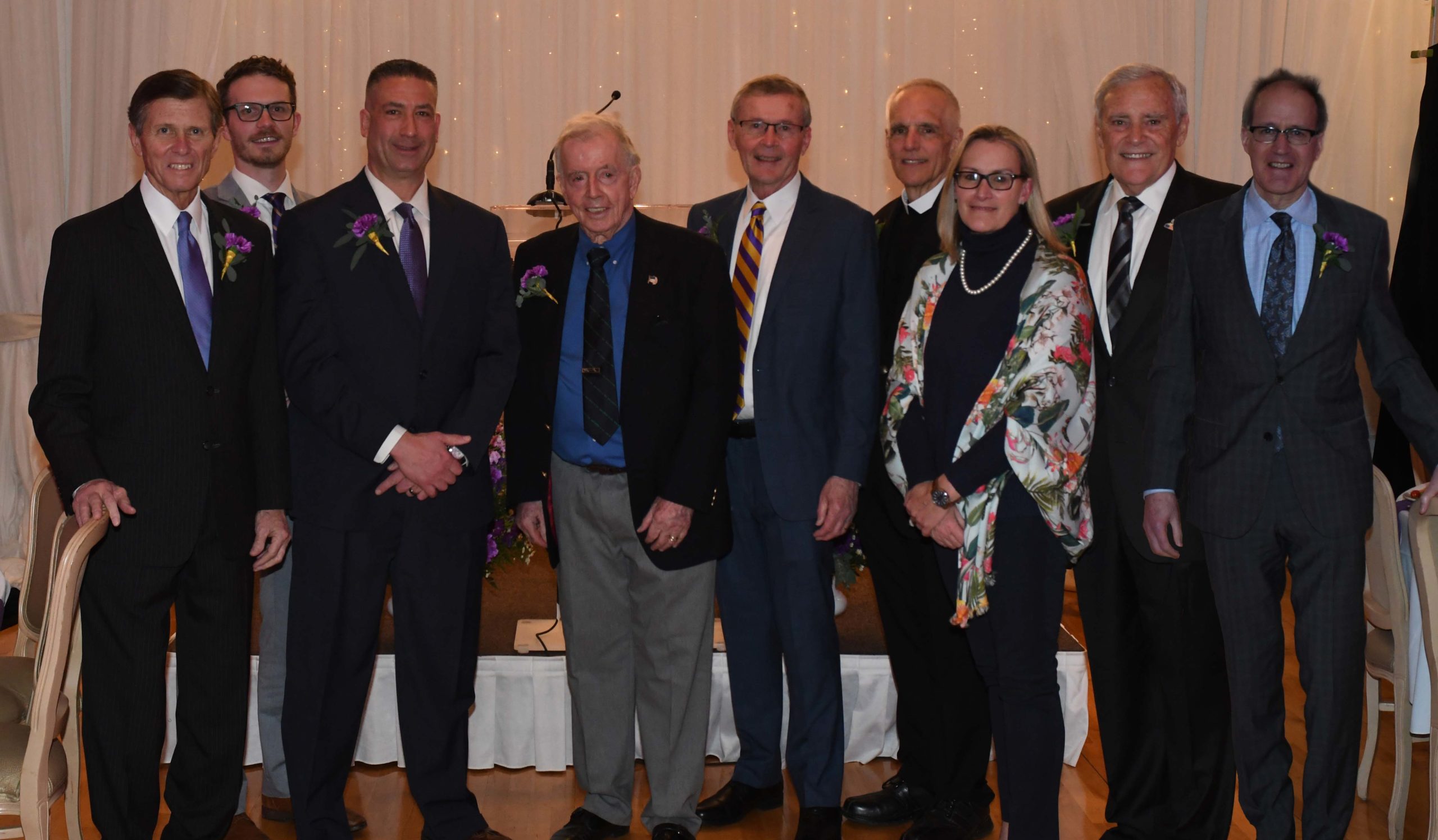 It was a lovely evening of reconnecting with old friends and meeting new ones, remembering times past and sharing stories. All were associated with the little school on Walcott Street in one way or another, and were assembled to recognize some very special people.

The second class of Saint Raphael Academy Hall of Fame honorees was inducted on Saturday, April 2, 2022, at the Alpine Country Club in Cranston. The event acknowledged those who have had a long association and outstanding record of service and loyalty to the Academy. The event was rescheduled from March 2020.

The inductees in the Class of 2020 are:
Dr. Paul J. Healey ’49 (posthumous) — Valedictorian of his class and an avid athlete, Paul Healey grew up a short walk from Saints. He went to Fordham University and Boston University School of Medicine, graduating in 1958. Paul became a surgeon at Memorial Hospital and raised a family in Pawtucket. Paul served as team doctor for the SRA football team for years.

Robert A. Magill ’29 (posthumous) — A member of the first graduating class to attend Saint Raphael Academy for all four years, Robert was a lifelong resident of Pawtucket and an active and decorated public servant and community volunteer. He was president of the SRA Alumni Association and helped erect the Archangel Raphael statue in front of Saints in 1948, honoring 19 graduates who died during WWII. Four generations of Magills have since attended Saints.

Br. Edmond P. Precourt, F.S.C. ’63 (posthumous) — Brother Edmond became interested in the life of the Christian Brothers while at SRA, taking first vows in 1964. He earned a bachelor’s degree from Catholic University and a master’s from St. Mary’s University of Minnesota. Br. Edmond flourished in his various Lasallian leadership and educational roles, including serving as principal at both The Prout School and Ocean Tides School. Sadly, Brother Edmond passed away in 2020 before SRA could hold an in-person ceremony, but he was aware and very proud of being selected as an inductee.

Patrick J. Nassaney ’64 – Patrick had a successful career in sales, marketing and management and honorably served his country, community and Saint Raphael Academy. He founded the Shawn M. Nassaney Memorial Foundation in memory of one of his three sons, Shawn ‘94, who was a 9-11 victim. The Foundation awards scholarships to students at Shawn’s schools, including SRA, and it champions and celebrates diversity of all kinds.

James J. Noonan ’54 – Jim was a stellar high school athlete and golfer, which earned him a full-tuition golf scholarship to Brown University. His career in sales engineering took him around the world and eventually led him to co-found Precision Metal Services, Inc. with classmate and close friend Marty Payton.

Martin J. Payton, Jr. ’54 – Marty, a Pawtucket native, was a standout athlete at Saints. He earned an engineering degree from URI and learned several languages, shaping a successful international sales engineering career. Lifelong friends Marty and Jim are a fixture at SRA’s annual Alumni & Friends Golf Tournaments, where they were both honored in 2019.

Dr. Dennis M. Tracey ’63 – A one-time member of the Saints faculty, Dennis had a multifaceted and accomplished professional career in engineering and education. He was class salutatorian and president at Saints and was a decorated football team player. He earned an academic scholarship to Brown University, where he eventually earned his doctorate in mechanical engineering.

Robert A. Weygand ’66 – A landscape architect and planner by profession, Bob also has a lengthy career as a college educator and administrator, as well as an honored community and public servant. He was a U.S. House representative from the 2nd District, and a former RI state representative and lieutenant governor. Faith, family and SRA are all close to his heart. Bob initiated the Class of 1966 scholarship for its 50th reunion.

Nominations for the next Hall of Fame will be accepted in 2023. Contact Ron Dalton, Director of Advancement, at 401-723-8100 x120 for more information