Meet the Leaders of the Class of 2022 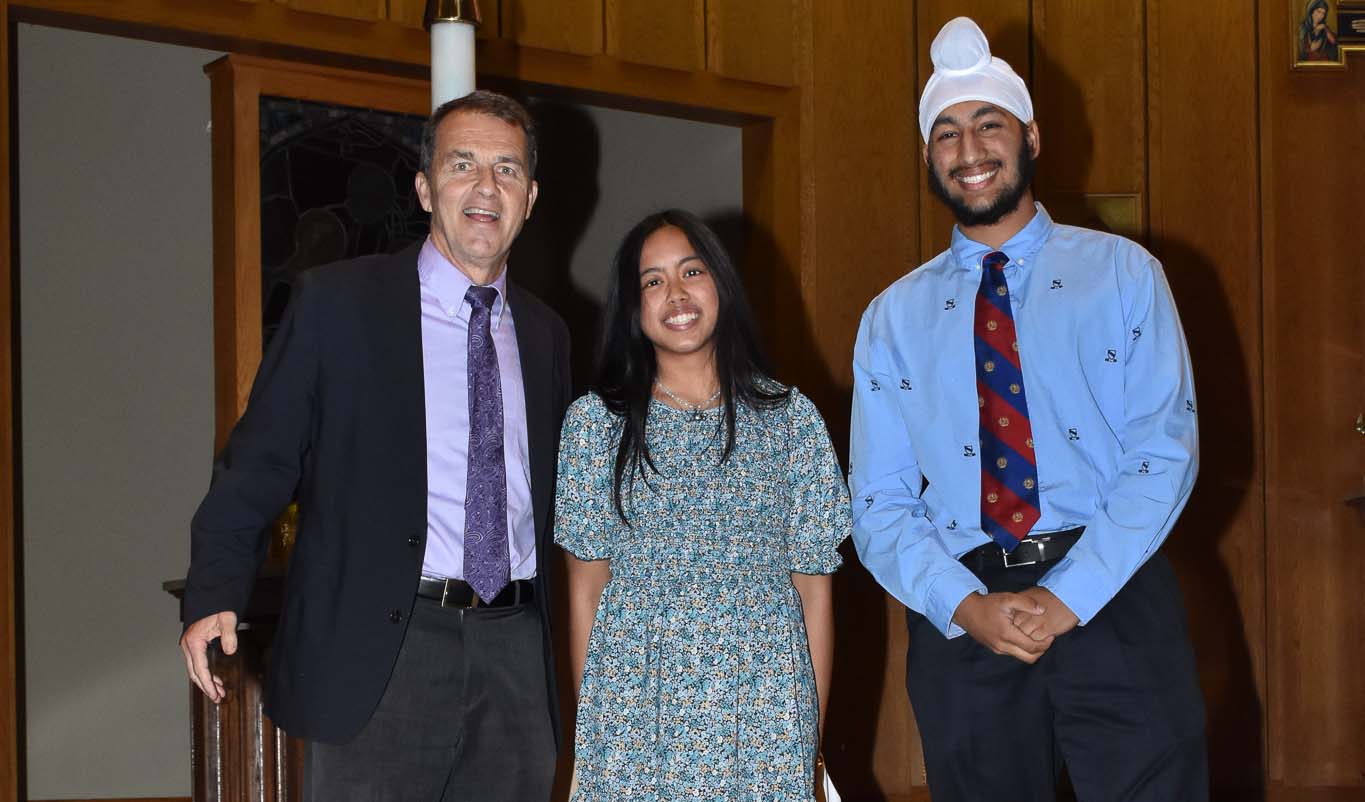 Last night, Principal Dan Richard announced the top students for the Class of 2022. The valedictorian is Amrit Kohli and the salutatorian is Ella Olea. The two friends will share the spotlight as the top students at Saint Raphael Academy commencement on June 4 at the Cathedral of Saints Peter and Paul.

Amrit is happy about their accomplishment and noted that their friendship began through a final project for Spanish class that involved making macaroni and cheese.
“It marked the beginning of an amazing friendship that has continued to grow through Saints. We always pushed each other to be our best after that occasion, and now here we are as salutatorian and valedictorian!” he said.

Ella also acknowledged the support she received from friends and family, saying they gave her the motivation to keep her going.

Amrit and Ella are in many classes together and are separated by mere tenths in their rankings as the number one and number two students in their class. Amrit has a 115.82 GPA while Ella earned a 115.66 GPA. Both students, as one would expect, took a full load of Advanced Placement and honors classes this year, and achieved honor roll and National Honor Society in their junior year. They are both in Moore Scholars program, a special program for our advanced scholars to further academic inquiry into a chosen topic. Their project (of course they worked together) involved creating a solar plan for the Academy.

Their interests have overlapped in a number of activities, such as tennis, Tabletop Club, the school newspaper, Math Team, Table Tennis Club. Both are also active volunteers in their spiritual communities, with Ella serving as an altar server at her parish and a lector at school masses. Amrit has volunteered at the Sikh Temple serving lunches and was an assistant coach for CYO basketball.

And both are a product of the diocese’s Catholic schools; Amrit came to the Academy from St. Luke’s School and Ella went to St. Rose of Lima School.

As for their differing interests, Amrit, a resident of Warren, has been active in sports, playing everything from soccer to basketball to tennis and table tennis. He participated in the Mock Trial and FBLA and was a class officer for three years at Saints. He was also an orientation leader to assist incoming freshmen with their adjustment to high school life and Lasallian Youth, helping with various service activities.

Ella, who is from Warwick, is very involved with the arts at SRA, playing flute in the pep band and participating in Art Club, Photography Club and is an editor for the school newspaper. She is also a member of crew on drama productions. She has been active on the tennis team for the last three years, and it is where she had some of her best memories.

“I really loved the versatility of our little community and our ability to handle any situation that came our way,” she said of the team. “We used our differences to bring ourselves together; all of us were supportive of each other. We triumphed during wins and recuperated on our losses. Regardless of the outcome, our team spirit was inextinguishable, which can be seen not only within our team but throughout our entire school—and that’s just what makes the SRA spirit so unforgettable.”

For Amrit, freshmen year Walkathon is something he will always remember. “It felt so surreal compared to what I experienced in middle school. It was those moments with friends that I realized I was growing up and moving on to be part of such a great community of people.” The Saints experience will stay with them as they depart Walcott Street.

Amrit will be heading to Boston University in the fall and received a very generous scholarship to study aerospace engineering. Ella plans to continue her studies at Brown University and major in molecular biology on a pre-med track.

The Class of 2022 will graduate on Saturday, June 4, at 2:30 at the Cathedral of Saints Peter and Paul. Admission is by ticket-only. The ceremony will be livestreamed through the Academy’s Facebook page.